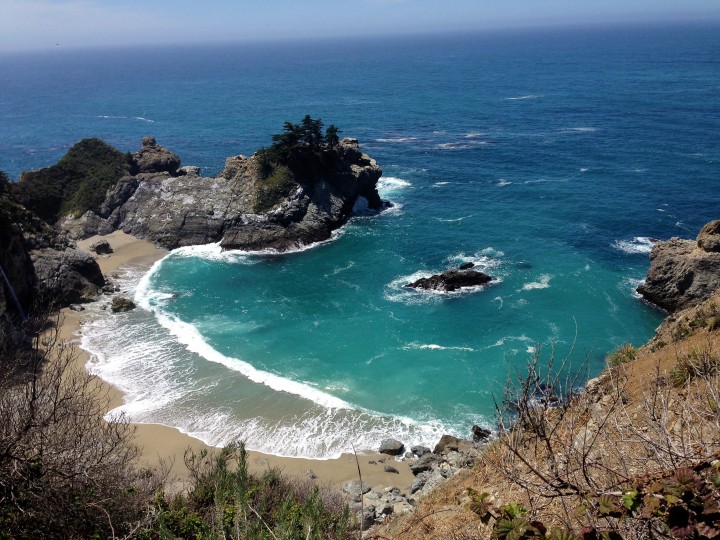 Hello everyone! Lucas and I just got back from a weekend trip out to the west coast! We had some great weather and even better memories on our trip that we want to share with all of you.

Our first night we arrived in California’s San Jose late at night. Our plane touched down at 11 PM and we made it to the hotel, Marriott’s Fairfield Inn & Suites, by midnight. Needless to say we were exhausted from our travels and just wanted to go to bed at that point. But not before we took a midnight stroll in the California air through the hotel’s central area that housed the outdoor pool and jacuzzi! The pool was closed and it was a little cool at night to go for a swim but the scenery was amazing and the pool was lit up and really pretty to walk around. 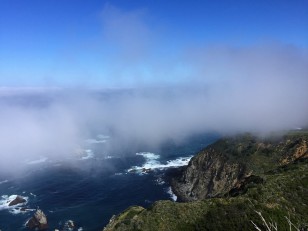 When we woke up the next day we got started with a continental breakfast. There were scrambled eggs, bagels, waffles, bacon and more served for a well needed morning meal. Once Lucas and I downed our hearty breakfast we made our way on the shuttle over to the rental car area of the airport. Then we headed down the coast of sunny California towards CA-1 and Big Sur. CA-1, for those who don’t know, is a long and winding road that puts you between a mountain and the coast line. While it sounds dangerous the views are to die for!

Our first stop on CA-1 was the Bixby Bridge. This bridge goes across what at first seems like a small fold in the mountain. But once you get closer you can see it goes a huge distance not only across but down too! There is a spot right before the bridge for travelers like us to make a pit-stop and take pictures as well as enjoy the view!

Next it was on our way to find Pfeiffer Beach. But by this time we noticed our phones didn’t work, there was no signal! Luckily we came across an visitor’s center where we were given a map of the area. They also pointed the way to Pfeiffer Beach for us which was a big help!

Only a short ways down the road from the visitor center we found a narrow road, barely big enough for two cars across, that stretched for two miles before it opened into a parking lot before the beach. Once we parked and got onto the beach we were shocked by the beautiful scene. There were natural rock outcroppings with small caves, a small river running through the sand where the water could warm in the sun, and even purple sand! What’s more was only 60 cars can fit in the parking lot so the entire experience was kept more for ourselves instead of the normal public beach experience. I highly recommend making this beach a stop on your travels in California!

Our last stop for CA-1 was McWay Falls. The only state park we stopped at, but worth the trip for the view. About 11 miles down the road from Pfeiffer Beach we found the parking lot with a trail leading to a viewing deck. Unfortunately at the time of our trip they were doing some renovations on the viewing deck but we were able to still see the falls from where we were and it was still very pretty!

After making our way back up from the falls we made it to Vision Quest. Vision Quest is the bed and breakfast created as part of the Monterey Zoo for those interested in the animals they keep there. The zoo was originally started as a hotel for animal actors. It now serves as a small time hotel (not many animals are used in movies anymore), a retirement home for these animals, and an aspiring full-time zoo. Lucky for us we were able to stay in the bungalows they have set up around the field for their elephants. We arrived in time for their 3:30 PM animal tour when they bring members of their animal community to meet the bungalow visitors. We were able to meet some friendly alligator babies and a capybara (so cute!).

Once we had met the animals and settled into our bungalow we headed to the Black Bear Diner in Salinas for some dinner. Lucas had the NY sirloin steak and I got the chicken pesto pasta. The food was good at Black Bear but the pesto pasta was definitely the best part. The restaurant also stays very true to the black bear theme including it’s own gift shop filled will plushies and other black bear paraphernalia!

After going back to our bungalow to freshen up and rest for a bit after dinner we headed into Salinas for a drink. We ended up at Monterey Coast Brewery. Of course we had to try some of their recommended drinks. I had a raspberry beer that was refreshing and fruity. Lucas had an espresso beer that was intense and rich.

We ended our night with a walk around the property of Vision Quest. Making sure to stop by the elephant field to see the friends we would make the next morning. At night we could hear the sounds of the lions, tigers, and bears (oh my!) as they roared and grumbles all night. They told us the staff at the zoo can tell which animal it is based on the roar they hear too! 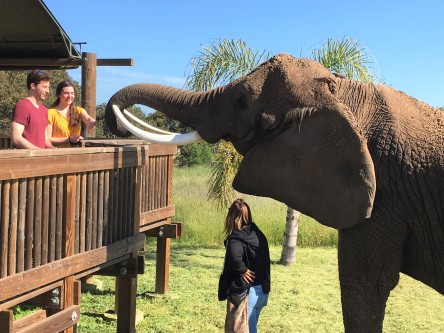 The last day in California started bright and early. With a slight dew over the whole property we watched from the deck of our bungalow as the elephants made their rounds. Their rounds being breakfast for each of the eight bungalows at Vision Quest. Lucas and I happened to be in the bungalow they served last, but that didn’t stop the elephants from eating right out of our hands! We were given some carrots and apples to feed them as well as our own breakfast via elephant. I couldn’t believe how rough the elephant’s skin was, or that there were little hairs down its entire trunk!

Once we had given the elephants their snack and had our breakfast of apples, bananas, pastries, yogurts, and bagels we headed to check out. But our time at the zoo had just begun as we started our tour of the Monterey Zoo itself. We were given a guided tour which is given at 1 PM everyday at the zoo. They teach their visitors about many animals including; baboons, alligators, kangaroos, many types of large/small cats, hyenas and of course the elephants. The tour guide told us about their eating habits, predators and prey, sleeping habits, and much more.

Finally with the tour done we made a quick stop at the gift shop before heading back to San Jose. We got a magnet of one of the elephants they had there and an awesome mug. The mug was a bright red color with an imprinted lion from the zoo! 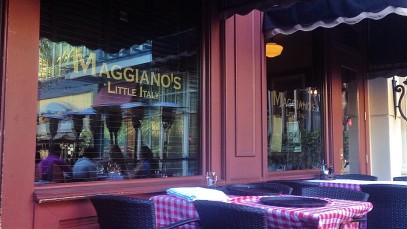 Back in San Jose we made a stop at Santana Roe before heading back to the airport. Santana Roe is a large shopping center in San Jose with a lot of beautiful Spanish architecture and high end shops/restaurants. We ended up eating there at a restaurant called Margianno’s. I had the lemon herb salmon, which just melted in my mouth it was so good, and Lucas had the homemade gnocchi with a red sauce.

We were able to take the “red eye” back here to NY after our great adventure. A great and fun filled yet tiring trip! Have you gone to California? Seen elephants on another trip? Share your traveling stories in the comments below!

9 thoughts on “Our Cali Trip”

Hello and welcome, We are Lucas and Faith. Our goal is to inspire people to cherish all the little moments, explore our beautiful world and give back to their community. Here, we will we take you on our journey and share our little moments, favorite quotes, recipes and more!